The Florida Forest Service (FFS) and Florida Natural Areas Inventory (FNAI) have partnered to develop the Longleaf Pine Ecosystem Geodatabase (LPEGDB), a spatial database that will serve as the central repository for data on the distribution and ecological condition of longleaf pine ecosystems (LPE) in Florida. The database includes data provided by many partner agencies and organizations as well as new field assessment data collected for this project.

The LPEGDB represents a major step toward fulfilling inventory and assessment objectives of Florida's Forest Action Plan and the America's Longleaf 2009 Range-wide Conservation Plan for Longleaf, and ultimately should provide decision support for where and how to accomplish goals for conservation, restoration, and management of LPEs. FNAI and FFS will continue to enhance, improve, and update the LPEGDB along with related tools and maps as funding allows.

Longleaf pine ecosystems are among the most diverse in North America, supporting a large array of herbs and grasses as well as rare animal species such as red-cockaded woodpeckers and gopher tortoises. Although longleaf forests and savannas once dominated the southeastern coastal plain, they have been drastically reduced from an estimated 90 million acres to less than 3 million, largely due to urbanization, over-utilization, conversion to other land uses, and exclusion of natural fire regimes.

Much of the remaining acreage exists as fragmented stands in varying degrees of isolation. Recently, however, many organizations and agencies have taken steps to prevent further loss, improve what's left, and restore the longleaf pine ecosystem where practicable. The LPEGDB contributes to this effort by providing detailed, baseline data on the location and current ecological condition of remaining longleaf sites in Florida. 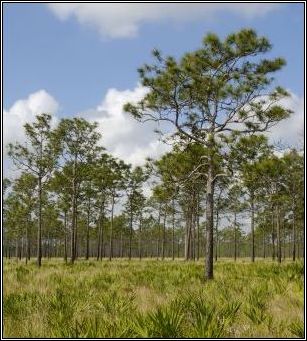 The purpose of the Longleaf Pine Rapid Assessment is to help complete a picture of the location and condition of longleaf pine across the state of Florida. This geoform enables users to provide stand location information on a map and fill out a rapid survey about the occurrence and condition of longleaf pine in the stand. This information will become part of the LPEGDB statewide dataset that will be used by various organizations for restoration and management planning.

Secrets of the Longleaf Pine

Longleaf Pine in the Southeast